Yes, that's right. A model Railway exhibition report. A British model railway exhibition report to boot!
I was recently in the UK visiting family and I discovered that my visit coincided with the Grantham Rail show. I needed to see a good old British model railway exhibition. See what I've been missing all these years. As luck would have it the show was even being attended by some old friends from Mablethorpe and district Model railway club. So we had a meeting behind the layout. Overdue membership fees were mentioned...
So to the show. Even though it was in a smallish hall, the organisers fitted 13 layouts in there and as many trade stands.
Every layout had something to recommend it, from N scale to O scale. All the layouts were well finished and presented. Even my American wife mentioned this fact.
So to my three favourite layouts.
3: Cromer (00 scale). A very atmospheric depiction of Cromer railway station in North Norfolk. The builder had got the modern atmosphere spot on even though it was a very simple track plan the standard of detail gave you a lot to look for. 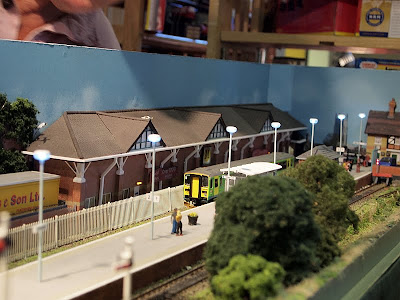 2. Winterschlaf (0M scale): OK, so it's Bob's layout from the M&D MRC but it really is a cracker. The scratchbuilt buildings are super and the detailing is great. Oh and he let me operate the trains as well... :-D. My first experience with DCC and it all ran very nicely. 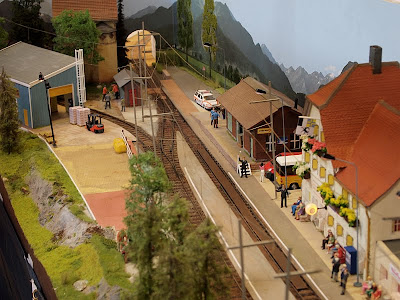 1. Rowlands Castle (00 scale) What can I say? This layout blew me away. A depiction of Southern England in 1944. Excellent running and once again a staggering level of detail. Perhaps everything was a bit too clean. 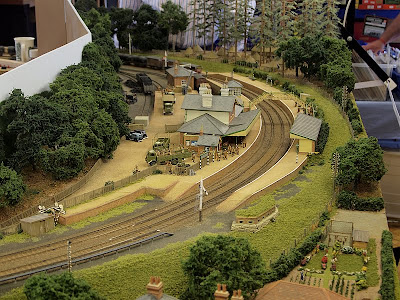 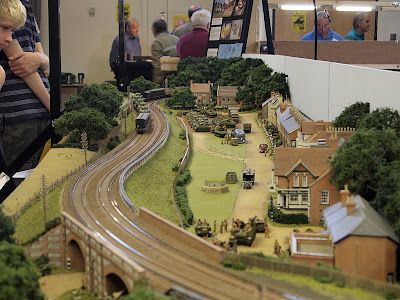 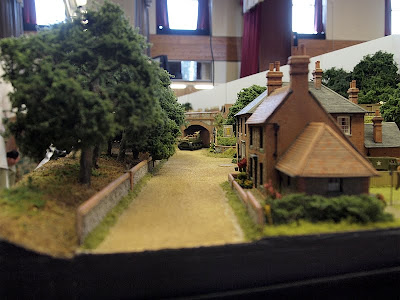 The show was so refreshing to attend. Compared to the US shows I've attended it pretty well beats them all. The sheer variety of layouts for a start. UK modellers seem to have more imagination about subject matter for their layouts. Here we had French and Swiss layouts, a model of a steelworks and a wartime England layout. Most US shows centre around large modular layouts or Lionel. Also the layouts are invariably modern image. I'd like to be proved wrong on this. Perhaps its just the Midwest.
My only criticism of this show was the amount of motive power depot layouts. No less than three of the 13 were TMD's. One in N scale and the others in 00. In my memory I can't tell the two 00 scale TMD layouts apart now. Alas there does seem to be a plethora (or plague) of TMD layouts on the British exhibition circuit these days.
No P4 layouts unfortunately but that didn't matter. I enjoyed myself anyway. I even came way with a book of layout plans for inspiration and ideas but that's a story for another day...
Posted by Ian Holmes at 5:31 PM 1 comment:

... to do something. Don't you think?
It's not that I haven't been busy railway modelling. I took my H0 scale layout to a local show and was very well received. I've been dabbling in T scale still. On top of that I bought myself a new camera.
While I was working on some T scale stuff I became aware of the UK outline kits and bits that are being produced in T scale including a Deltic, of course that got me thinking about my UK outline project - this one. I've got to get started and kill this inertia that has built up.
Taking the 7 day layout to the show taught me one thing. Saltfleet Haven CANNOT be 4'6 long. It won't fit in the back of our small car. Four foot is the maximum length. No two ways about it. All previous sketches and designs have been based around a 4'6" length that will have to change, hopefully it won't kill the atmosphere of the design though.
Posted by Ian Holmes at 12:05 PM 1 comment:

Quiet on the 4mm scale front

Just in case you're wondering if I've dropped off the face of the earth . No I haven't. I'm working on some stuff in T scale 1:450 including the worlds first scratchbuilt piece of T scale freight stock this 65' mill gondola is only 45mm long
Posted by Ian Holmes at 4:02 AM 1 comment:

Anytime you can find a return plane ticket between the USA and the UK for under $1000 you snap it up. So I did.
Got to wait 6 months for the flight mind. But for sure one thing I will be doing will be heading up to Saltfleet Haven and taking some pictures for atmosphere.
We arrive August Bank Holiday weekend. Well it'll be raining then. global warming or no global warming. One thing you can be fairly sure of is rain on August Bank Holiday. We even used to plan the Mablethorpe & District Model Railway Club Exhibition for August Bank Holiday Monday because of the rain and folks wouldn't be on the beach. Didn't we Yan?
Posted by Ian Holmes at 11:52 AM 4 comments:

Ironically, I was working on a 1:450 scale (T scale) model of a midwestern grain elevator and I realised that I hadn't renewed my subscription for the S4 society yet.
So I quick as a flash got online and did it.
Got to love being able to do these things online. Two minutes and it was done just like that.
Another years worth of S4 help and inspiration is mine.
Posted by Ian Holmes at 11:24 AM 3 comments:

More T Please is the name of my blog about my activities in T scale. The worlds smallest model railway scale. Pop over there to see some inspirational examples of work in this tiny scale
Posted by Ian Holmes at 5:50 PM 1 comment:

Ian Holmes
An inveterate blogger I like to blog about the things that strike a passion with me, and share my enthusiasm for them with the world.